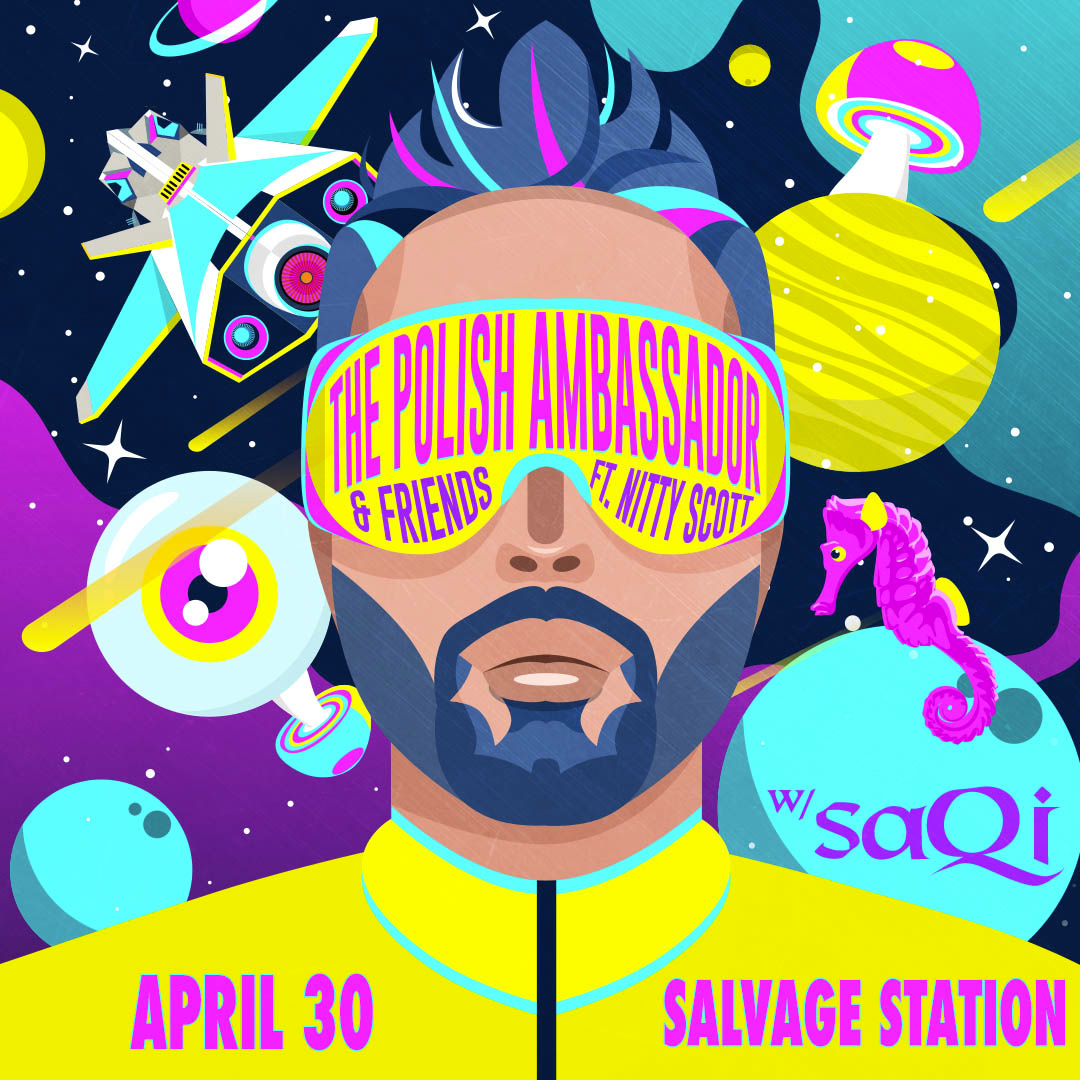 Musician. Producer. Beatsmith. Recording artist. Composer. Dance-floor general. Label-head. A mystery man of many hats, The Polish Ambassador rocks more than just a trademark jumpsuit, authoring sublime, intentional artistic works, animated safaris in technicolor sound.  At first breath, The Polish Ambassador was an experiment, David Sugalski’s sound-art passion project that came to life. An inventive, imaginary character born of humble, humorous beginnings, he found his first audiences through the support of primitive digital radio stations. Today, TPA is among the premier EDM/live crossover artists in the country with millions of listeners around the world; he’s consistently in-demand at the live music-focused gatherings and boutique electronic festivals from coast to coast. Founder of independent label Jumpsuit Records, an environmentalist and early progenitor of the permaculture action movement, the world’s funkiest diplomat is here to party with a purpose.

Since 2006, The Polish Ambassador has consistently released critically-acclaimed full-length albums on Jumpsuit Records, alongside a dizzying number of side-projects and multi-form collaborations. All the while launching the careers of a diverse smattering of artists that run the gamut in geography and genre. TPA continues to spread his wings in teaming up with eclectic musicians from around the world, including Matisyahu, Nitty Scott, Zion I, The Grouch, Mr. Lif, and dozens of others. He is one-half of the celebrated folktronica project Wildlight, a duo in which he pairs with ethereal songstress Ayla Nereo.

The Polish Ambassador’s prolific output incorporates many styles, from exuberant global-house to fatback mid-tempo funk, you’ll pick up on West African percussion alongside stirring Kirtan melodies, a psychedelic sax solo or a fresh verse from a Brooklyn female emcee. TPA employs live horns, keyboards, guitars, violins, and a bevy of talented instrumentalists on stage. “The Jumpsuited One” has headlined iconic venues like Red Rocks Amphitheatre in Morrison, Colorado, and the renowned counter-culture gathering Oregon Country Fair. Suwannee Hulaween, Electric Forest, Envision Festival, and Lightning in a Bottle and other national festivals have each repeatedly invited TPA back across different years.

In alignment with TPA’s artistic ethos is a low-key lifestyle that places a premium on being present, living in harmony with nature, participating in community and inspiring it to thrive. Offstage, David Sugalski instigated a village-building convergence in his hometown in Northern California, and manages his own 25-acre homestead in the picture-Esque, rolling Sierra Nevada foothills. The farmer/carpenter lives modestly in a cabin he built on his land of the lush; TPA music is created in a solar-powered recording studio on the property. When he removes the famed bright blue-and-yellow 80’s jumpsuit and reverts back to his humanoid self, Sugalski is an avid solo bicyclist who enjoys venturing up California’s breathtaking coastal Highway 1; he’s a dedicated van-adventurer, having built out an exquisite tiny home inside a contractors van.